Victimized by your bad habits? Believe that you’re stuck with them for life? According to Charles Duhigg, a well-respected author and New York Times columnist, you may want to hone rather than scrap your well-polished sequences of behavior. Habits can be put to either good or bad use, depending on the situation. At their worst, they cause destructive, addictions and dependence. At their best, habits allow you to boost your efficiency and effectiveness. The term “habit” has acquired a bad reputation because it is associated either with addiction or mindlessness. However, because habits can routinize the boring and & mundane aspects of your life, they are among the most efficient and effective of all the behaviors in your repertoire. They allow you to offload your mental energy from routine daily tasks so you can devote more resources to the tasks that require real thought and creativity. They can also, despite what you may have been told, be controlled. In his book, The Power of Habit: Why We Do What We Do in Life and Business, Duhigg takes us through a compelling personal and scientific narrative that, dare I say it, proves to be habit-forming on its own. The doubter in you will be convinced by the many examples he provides of successful habit use that include corporate marketing, promotion of pop songs, overhauls of big business, and resounding of sports teams. He also shows us the downside of habits when they lead to inflexibility and inability to respond to changing circumstances among everyone from hospital workers to London Tube employees. As is true for the most tormented drug addict, it may take a crisis to break through the dysfunctional habits built into a large organization when its employees become too locked into “business as usual.”

The key to unlocking the power of habit for you is to understand that habits are formed and maintained through a cyclical process called a “habit loop.” Your habit loop begins to form when a behavior you perform leads to an outcome that you desire. If you want to get that reward again, you’ll repeat the behavior. Then, for the loop to be complete, you also need a cue to trigger your craving for the desired outcome.

There are plenty of examples throughout the book of habit loops for everything from winning the Super Bowl to improving safety records at an aluminum plant. Of the many compelling examples, perhaps the easiest to summarize here are is the habit loop involving the mall-based Cinnabon stores, those ubiquitous purveyors of some of the most dangerous food on the planet. The habit, in this case, is eating the delicious calorie-packed morsel. The reward is the pleasure that comes from eating it. The cue—and this is the main thing— is the smell. As you’re making your way from Foot Locker to the Gap, that cinnamon scent hits you with full force. You may have no interest whatsoever at the moment in having a snack, and in fact have sworn off all sweets, but then that unmistakable scent overwhelms you and puts you under its spell. Your brain wants that treat and nothing else in the world can shut down that need (or so you feel at the time). You stop everything and grab that Cinnabon, knowing that you’ve just made it that much harder to fit into those chinos you were planning to buy at the Gap. 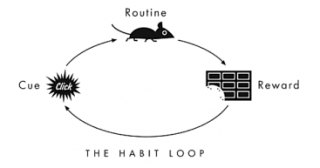 Marketers capitalize on the habit-producing nature of powerful product cues. Duhigg chronicles case after case of advertising campaigns designed to create cravings that make you want something you didn’t even know you needed. For example, the rewarding feeling of being “clean” leads us to purchase products from toothpaste to air fresheners to produce that sensation over and over again, even if we’re not particularly dirty. The product labels become the cues that trigger the craving, which in turn leads to the habit, which in turn leads to the reward, and so on. Advertisers have convinced us that we not only have to be clean, but we need to feel clean, preferably with their trademarked products.

Businesses can also capitalize on the habitual behaviors of their customers to market strategically to people who show predictable patterns of behavior. Ever wonder why certain ads pop up on certain websites or why you keep getting coupons in the mail perfectly targeted to your needs? As Duhigg shows, marketers have figured out how to read not only your keystrokes but your habitual browsing and shopping habits. It may creep you out to think that Target knows a woman is pregnant by her shopping habits, but by using the psychology of habits, that is just what Target (and many other businesses) do to pinpoint your buying needs. Fair warning: if you’re convinced that corporate conspiracies reside everywhere, you may want to skip some of these chapters or you’ll never set foot in a store again. Of course, that would be unreasonable, so you should read these chapters and at least you’ll understand both the how and the why of the many ways that advertisers manipulate us.

Lest you wonder, at this point, whether my blog’s title was false advertising, rest assured that there is plenty of good that our habits can do for us. Duhigg shows, again in fascinating detail, that the very habit loops that lead us to buy products that we don’t need can also lead us to become capable of remarkable successes. For example, it’s valuable to have an automatic response to an emergency situation for which there’s no time to think. You want to get your hand out of the way of a closing car door before you have time to ponder your course of action. It’s also helpful to relegate repeated and mundane behaviors to habit status so that you can think about other things. For example, while folding all that laundry you’re folding because you’re programmed by advertisers to do the laundry, you don’t have to think in detail about your actions. You can think about something else. If you had to stop and ponder every habitual action you complete over the course of your daily routines, you’d never be able to reflect on how to solve the real problems that face you at your work or in your close relationships. When you’re riding the elevator or walking to work, it’s helpful that you can put your brain on autopilot while you figure out how you’re going to settle the argument you’re having with your best friend.

Your habit loops can give your brain a break when you need it for real work, then, but they can also pave the way for you to get rid of the habits you want to change or eliminate. This is particularly true of addictions. Let’s take the case of problem gambling. According to Duhigg, one of the most significant contributors to problem gambling is not that gamblers win (otherwise casinos wouldn’t make a profit!). No, the main contributor to problem gambling is the near win. In a near win, you get, for example, 2 out of 3 matches on a slot machine. You’re not actually being rewarded, then, for your gambling habit, but because you see yourself as so close to winning you become convinced that you’ll certainly win the next time around. Small wins can actually set you up for big habits that you’ll find almost impossible to break. However, habit change is not completely impossible.

Using the psychology of the habit loop, change becomes possible when you use the cue to trigger a new behavior that itself leads to a reward, perhaps different than the original reward, but a reward nevertheless. Problem gamblers see the near win as a reason to keep gambling. Non-problem gamblers reward themselves for the near win (which they correctly interpret as a loss) by leaving the casino without losing more of their money. Understand the cues that trigger the behavior, substitute a new routine, and make sure that the new routine reaps its own reward. You’ll soon be craving the reward produced by the new routine, according to this logic.

On that note, Duhigg provides a 4-step plan for breaking a bad habit loop and substituting it with one designed to produce new habits that will benefit your mental and physical health. Unfortunately, habits are harder to break than to build, but this 4-step program can get you going in the right direction.

There’s no reason to let your habits dominate and possible ruin your life. Instead, you can use them to build large gains on small wins, redirect behavioral sequences that cause you to become addicted and improve your mental productivity. Old habits die hard, but they can die.